As described on the Configuring a leaderboard page, you can set any points type, achievement type or rank type as metrics to track.

But how users will be ranked based on this different types? A quick explaination is:

Let’s to see a example leaderboard with achievements, points and ranks as metrics: 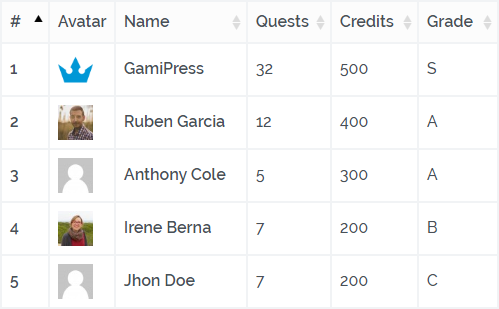 On this leaderboard users are ranked by the number of Quests (achievement type) they earned, their current Credits (points type) balance and their current Grade (rank type) priority.

To meet the rank priorities, there is a quick explanation of our Grade priority setup:

Let’s to see how internally Leaderboards add-on ranks this users:

The rank priority could be decisive to determine the user position, look at lowest positions where 2 users has got the same number of achievements and points but one of them got a higher rank.

Playing with the rank priority

In the above example you saw how the rank priority can affect to users positions, but you can make a rank be more decisive with the priority field.

Previously you see that grades are differentiated by 1 (1,2,3, etc) so users on a higher rank just sum 1 internally. But if you define your ranks with a differentiation of 100 like:

With a setup like that, an user with lower quests earned and points could reach a higher position thanks to his rank priority: