As any WordPress plugin, GamiPress can work on multisite installs with the default behavior of keeping configured data per site. This means that activating GamiPress on a network site, all points, achievements and ranks will be independent of other site.

But since 1.4.0 version GamiPress has a new way to work on multisite installs when is network wide active.

GamiPress has the ability to centralize all the data on multisite installs when is network wide active. This means that all GamiPress data like points types, achievements, ranks and logs will be centralized and common for all sites in network.

All user data like points balances, earned achievements and current ranks will be centralized.

Shortcodes and widgets placed on any sub site, will reconogize this configuration and will show all the data with support for this configuration, as well as links placed to see the achievement or rank single page.

On a WordPress multisite, only Super Admins can install plugins. Super admins have these options to activate a plugin:

When you log in to your WordPress multisite’s main site, you will be able to see two different plugins screen.

The first one is on the main admin sidebar. It is for plugins installed and available for activation on your main site.

The second plugins screen is located under My Sites -> Network Admin -> Plugins. This is where you will install new plugins and manage them for the entire network.

Click on Network Activate to active GamiPress to the entire network and GamiPress will start working automatically with network wide support.

After activate GamiPress to the entire network you will be able to access to the GamiPress menus accessing to you main site dashboard (and just from the main site, sub sites will not shown this menus). 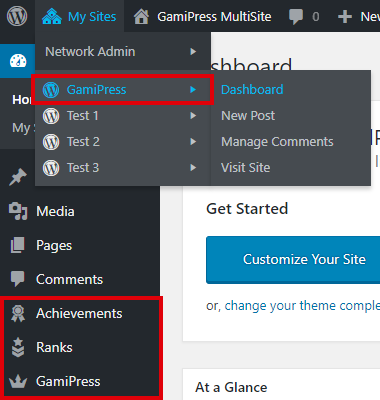 Just configure, the points, achievements or ranks that you want and automatically GamiPress will centralize everything to get it accessible network wide.

GamiPress will be configurable just on main site while will continue working on background on all sub-sites.

GamiPress offers some specific events that let’s you to focus an action to a specific post, like setup an achievement step for commenting on the “Sample” page.